Yesterday was my first day working from home.  Except I wasn’t working much, I have no computer or desk here yet.  I have my works mobile phone and a note book!  Tomorrow the rest of my work equipment will be delivered, by a man, wearing gloves, who will leave the items at the door, and text me when he is away from the house.  Then I have to get the stuff inside and assemble it all.  I might be able to do some proper work come Monday!

I hit 3 of the vulnerable groups,  I am expecting that I will be contacted by the NHS sometime next week with more stringent instructions for social distancing.  Likely that will mean staying indoors for at least 12 weeks.  That’s pretty grim, but, the reality is, like thousands of other people who are vulnerable, to go outdoors is to risk life itself.  So a few weeks under house arrest seems the preferable option.

Outside, the world is changing.  It’s surreal, like in a movie, my sister likened it to The Living Dead TV Series.  There’s hardly anyone around, the streets are empty, it’s quite unnerving.  The empty shelves in the shops are scenes reminiscent of Russia in the 70’s, when there was nothing.  The schools are closing from tomorrow.

At the beginning of this week I was scared, then stressed and very unsettled. I feel totally alone, although I know I’m not, I have friends, family, work colleagues all at the end of the phone.  And there are thousands of people in the same boat as me.  Yet, for the first time since my hubby passed, I feel lonelier than I’ve ever felt.  Today, I feel calm, but it is not an easy calm, more an eerie kind of calmness. And I know this is going to get a lot worse before it gets better, and all we can do is sit it out.

I’m sorry for rambling. It’s my outlet.  I probably will ramble some more here before we are done.  But, I am trying to stay positive, and I will try to keep it as light hearted as I can.

Thank you for listening, stay safe my friends ♥

Closeup of the Kiss Me Lips and Kylise Eyes by Beauty Kartel, available at The Skin Fair until 29th March.  Click the pic to see it BIGGER 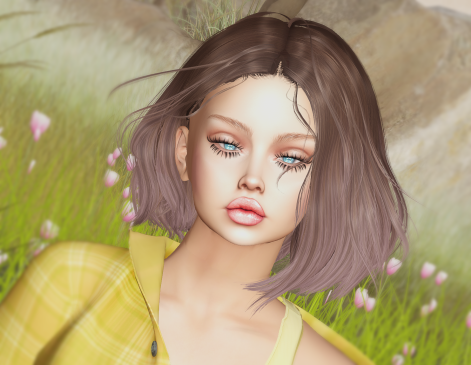